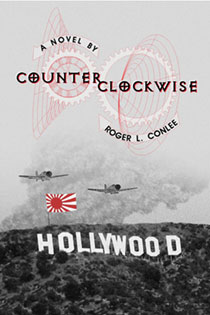 Though he doesn’t really believe in time travel, a California cop and his fiancée nevertheless slip through a seam in time. They find themselves in a war-jittery 1942 Los Angeles – disoriented, friendless and suspected of spying for an enemy that has just bombed Pearl Harbor and might do the same here. This genre-busting book-within-a-book won prizes and sold like hotcakes.

Preview a sample chapter of Counterclockwise

“An amazing page-turner. Roger Conlee spins a gripping story of two alternative timelines running side-by-side. Enough ideas are crammed into Counterclockwise for several books, but somehow the story never gets crowded, or rushed, or confusing. Against all odds, he has managed to weave all of these disparate elements into a single seamless plot. The result is a great read, and the stuff of pure human adventure.”

“With vivid panoramas of wartime life in Los Angeles and a light dusting of science fiction, Roger Conlee’s latest offering is a highly involving read that’s practically impossible to put down before the last page is turned.”

“This unconventional book-within-a-book is an absorbing combination of genres that never fails to surprise and intrigue as each layer is peeled back.”