SOULS ON THE WIND 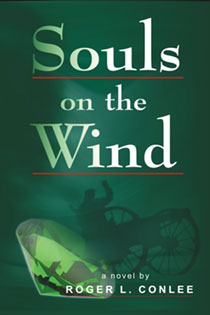 Roger’s fourth novel, this thriller with a dusting of science fiction features a devoted couple determined to do the right thing with an Austrian Crown Jewel suddenly in their possession. With what seems like supernatural help from a long-dead Civil War general, this 1980s couple tries to avoid cunning and desperate international jewel thieves, and return the treasure to its rightful place in Vienna.

Preview a sample chapter of Souls On The Wind

“Through the annals of time, some souls continue to clash and interact. Souls on the Wind tells the story of several souls throughout history. A thriller with a unique phenomena investigating various metaphysical concepts and the theory of past lives. With plenty to ponder and think about, Souls on the Wind is a unique read, very highly recommended.”

“Whirlwind last sections. I couldn’t put it down. Harrowing, complex, but incredibly interesting and compelling. Conlee has become a very, very good writer of novels.”

– David Nuffer,
author of The Best Friend I Ever Had, a study of Ernest Hemingway

“The Civil War, past lives, Austria’s Crown Jewels and a story of love that transcends even the greediest of souls all converge in this satisfying thriller by Roger L. Conlee.

The book finds police officer and history buff Tom Cavanaugh and his fiancée, the plucky Cass Nesbit, traveling to Vienna to return a precious jewel to its rightful owners. But Tom–who’s begun having oddly realistic dreams about being a soldier during the Civil War–soon uncovers a nefarious plot by someone who wants the priceless gem, at any cost. And then the Föhn begins to blow. Legend has it that the souls of the dead ride the Föhn , something the pragmatic Tom doubts.

The “lanky narcotics cop who’d rather be teaching history” is always on alert, doubtful of everyone, casing joints with his reflexive cop’s instincts; Cass, with her more tolerant nature and quick wit, is a smart foil for Tom, and gives the book a softer, more feminine edge and point of view.

Souls on the Wind will appeal to fans of suspense who like to exercise their brains while reading, whether it be learning about symbols, a la Dan Brown, the stark landscape of Sweden, a la Stieg Larsson, or history tinged with a bit of science fiction, as in Conlee’s tale.

Conlee is masterful at weaving suspense throughout the pages; a number of fast-paced twists and turns will have the reader gasping and constantly questioning the motives of the people around the main characters. The book is a gratifying, quick read–no words are wasted here–leaving fans thirsting for more adventures with Tom and Cass.”