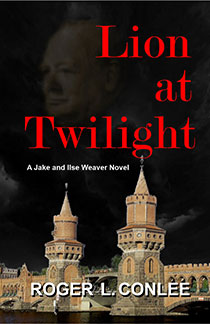 In 1953, British Prime Minister Winston Churchill vanishes and Whitehall goes into panic. Has the old lion, now 79 years old, been kidnapped? Or murdered? In Roger’s ninth historical novel, although the British government forbids it, Jake Weaver and his daughter Ilse head for Berlin at the bidding of a retired MI6 spy master. Hoping to find Churchill, they reach the divided city and encounter Cold War perils they hadn’t imagined.

Preview a sample chapter of LION AT TWILIGHT

“Lion at Twilight” is a gripping novel in which the author captures the texture and feel of divided Berlin in 1953, the free Western zone and the communist East that wants to control it all. Jake Weaver and his daughter Ilse dive into this world hotspot hoping to find the elderly Winston Churchill, who has mysteriously vanished there. Can they find the British lion? Is he even alive? This fast-paced novel contains some of Roger L. Conlee’s finest work.”