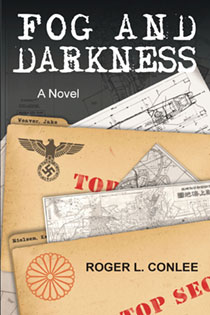 A Marine Corps officer and a war correspondent hope to have the courage and luck to live through the horrific final year of World War II despite unimaginably savage battles and constant danger of other kinds. Historic figures such as President Franklin D. Roosevelt, Generals Douglas MacArthur and George Patton, and rocket scientist Wernher von Braun all appear in this narrative, which is told with faithful historical accuracy.

Preview a sample chapter of Fog And Darkness

“Conlee has done his research. The story hews closely to what happened in places like Peleliu and Bastogne, right down to the songs that were popular back then. It effectively captures the sweep of the war’s deciding months, when everybody understood what was at stake.”

“Conlee writes masterful historical fiction. Intrigue, love, and war glimmer through Fog and Darkness, the tale of a fateful hour.”

– Elizabeth Cobbs Hoffman,
author of Broken Promises, A Novel of the Civil War

“Fog and Darkness pays homage to the 1st Marine Division and the 101st Airborne Division for their heroic achievements and at the same time makes a fresh examination of America’s wartime strategies, both good and bad. It’s a ripping good war novel with a refreshing approach to World War II.”

“As we are whisked through the 330 pages of Fog and Darkness, Roger Conlee’s newest offering, we learn that the heroes and headliners of World War II weren’t nearly as righteous as they were portrayed in the annals of military history and our high school textbooks.

Conlee’s fifth work of WWII historical fiction suggests that egos and political aspirations of military leaders cost America more lives than necessary in the Pacific and Europe. It also exposes the operations of Wernher von Braun’s Nazi rocketry program and unveils a shocking, little-known fact. Fog and Darkness is a great read, probably Conlee’s best yet.”