EVERY SHAPE, EVERY SHADOW 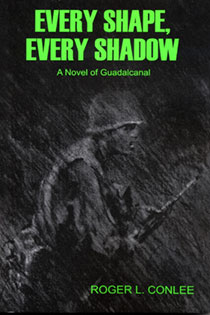 This accurate but fictionalized account of the Guadalcanal campaign of World War II is seen through the eyes of the Marines’ commanding general, his enemy counterpart, a tormented Navy nurse, and a Japanese dive-bomber pilot. But it’s mainly the story of a bright, lonesome young Marine from the American Midwest. It’s the first desperate, deadly battle in the South Pacific and the first time the Marines square off against the Japanese Army.

Preview a sample chapter of Every Shape, Every Shadow

“There are few war novels that rise to this level of expertise…This is a page turner; you will not want to put it down until you have finished the book even if it is well past your bedtime. There have been few really good books written about the heroics of WWII and now you can add this one to that list. It is that good!”

“Places the reader on the front lines, taking cover in muddy foxholes, suffering with malaria, and facing a fanatical Japanese adversary…demonstrates an understanding of tactics and weaponry.

The constant stress and fear in Every Shape, Every Shadow should resonate with readers when they consider these same pressures facing Americans deployed in Iraq or Afghanistan.”

“Every Shape, Every Shadow is a must-read for veterans, particularly those of the Marine Corps and Army infantry, who will recall the sights, sounds and horror of face-to-face combat.

Conlee’s character development and style–taking us from his protagonist to other characters of historical significance in rapid succession, chapter by chapter–keeps us turning the pages. Very quickly.”

“Chronicles the experiences of a young Marine during the fierce fighting with the Japanese.”

“Sequencing is superb and his story-telling skills draw readers in and hold them.”