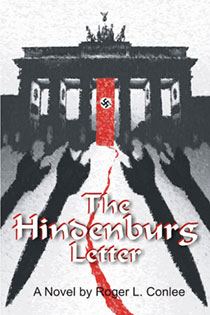 An impetuous reporter for William Randolph Hearst risks everything to steal into Nazi Germany during World War II on a desperate mission of family revenge — one that might cost him his life. He encounters Wernher von Braun, Hermann Goering, and a beautiful spy he can trust — or so he hopes. And two of the most staggering surprises of his life.

Preview a sample chapter of The Hindenburg Letter

“The Hindenburg Letter blasts off like a Nazi super-weapon, and doesn’t slow down until it reaches the explosive climax. Another brilliant historical thriller from the mind and pen of Roger Conlee. Unadulterated edge-of-the-seat fun.”

“Is the lust for revenge strong enough to go through the regime of Nazi Germany to claim it? The Hindenburg Letter follows a tale where one may be prepared to do just that. Roger L. Conlee is an experienced writer of thrillers with a focus on World War II, a subject he knows well. He places his knowledge alongside his fiction for an entertaining romp. The Hindenburg Letter is a delightful and exciting read all the way through.”

“One thing for sure about a Roger Conlee book, there are enough plot twists, turns and surprises to keep your blood stirred and the pages turning. Conlee also, in my opinion, is a master at dialog and can bring home his messages with sureness. There is nothing obtuse about Conlee’s writing. The Letter is a fun book and completely believable.”

– David Nuffer, author of The Best Friend I Ever Had

“Roger Conlee’s third novel, The Hindenburg Letter, places him among the elite of World War II “what if” novelists. Reminiscent of the earlier and best of Jack Higgins’ books, (The Eagle Has Landed, et al), Conlee’s latest carries the reader from character to character, surprise to surprise, plot-twist to plot-turn so smoothly and swiftly, you don’t have time to search for flaws. The historical characters – William Randolph Hearst, Walt Disney, Franklin Roosevelt, Hermann Goering to name but a few – are not only believable but necessary to the plot. Rich in documentary detail, The Hindenburg Letter sometimes reads as non-fiction, probably because so much of it is based on fact. But one also hopes that this is not the last we will read of Conlee’s fictional every-man hero Jake Weaver.”

– Robert P. Jones,
author of Wine of the Generals and other suspense thrillers

“The plot, pacing, characters and dialogue all jump far ahead of his first two novels. Conlee’s got the feel of really fine narrative. I loved the twists – scared hell out of me. Captures the best way possible to bring in the big names: Roosevelt, Disney, Harry Hopkins, Wernher von Braun, William Randolph Hearst and others.”