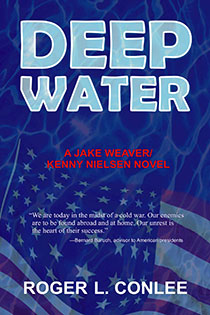 In the early days of the Cold War, investigative reporter Jake Weaver runs afoul of a multinational corporation and powerful banking interests while proving they took huge illegal profits from the Nazis during World War II.  Meanwhile, his friend, Marine Corps officer Kenny Nielsen, finds himself caught in the middle of the Chinese civil war between Chairman Mao’s communists and Chiang-Kai-shek’s Nationalists.  Weaver also finds himself on the infamous “Hollywood Blacklist.”

“It’s 1949 and the Soviet Union develops an atomic bomb. A possible war looms in Korea. Red spies are imagined everywhere in the U.S. as McCarthyism fans the flames of fear and paranoia. In the midst of this hysteria in Roger L. Conlee’s latest fact-based historical thriller, Jake Weaver and Kenny Nielsen find themselves in deep water. A terrific read.”

“In this page-turning thriller, action packs the every move of investigative reporter Jake Weaver and Marine Corps officer Kenny Nielsen, moves that are interwoven with threads of authentic history involving such real-life characters as Harry Truman, William Randolph Hearst and a young congressman named John F. Kennedy. As in his other books, Roger Conlee proves he knows his history; and as a former journalist, he has a talent for bringing Deep Water to life and for keeping you reading through the night.”

– Lynne Kennedy, author of Pure Lies and other novels